Difference between revisions of "Media player"

What are the available media players for Emacs ?

EMMS is the Emacs Multimedia System. It tries to be a clean and small application to play multimedia files from Emacs using external players. Many of its ideas are derived from MpthreePlayer , but it tries to be more general and cleaner.

The fact that EMMS is based on external players makes it powerful, because it supports all formats that those players support, with no effort from your side. 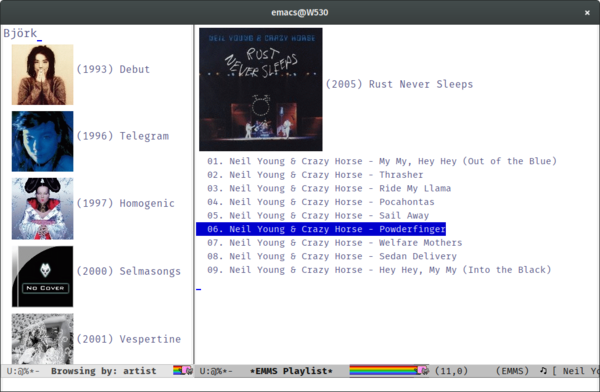 Install the needed packages with the package manager of your system :

(you may also try with el-get.)

add the following to your ~/.emacs :

and, as usual, restart emacs or M-x eval-current-buffer RET.

You can play a file or a directory with the command M-x emms-play-file or emms-play-directory.

You can add files and directories to the emms playlist (which will be created if it doesn't exist yet) with M-x emms-add-file, play it with emms-start and you can visit the playlist buffer by simply calling M-x emms RET. Hitting '?' in the playlist buffer will show you all the available shortcuts.

If you want to, say, be able to read flv videos :

Get lyrics of current song

We have to install emms-get-lyrics.el.

Then start playing a song and call M-x emms-get-lyrics-current-song.

Excerpt from its documentation :

The function 'emms-get-lyrics-current-song' tries to get the lyrics of the song that emms is currently playing [from http://www.lyricwiki.org/]. It currently requires w3m to get the lyrics. It copies the lyrics to a file ending in .lyrics; if the variable `emms-get-lyrics-use-files' is nil, it will just display the lyrics in a buffer without saving them to a file. If the variable `emms-get-lyrics-dir' is non-nil, then the lyrics will be put in this directory with the file ARTIST-TITLE.lyrics; otherwise it will be put in the same directory as the song file, in a file with the same name as the song file except the extension will by ".lyrics".

http://www.gnewsense.org/Documentation/Emacs#Listening_to_Music an easy tutorial to begin with.

mpg123 is a package written by HiroseYuuji for playing .mp3 and .ogg files with the mpg123 and ogg123 programs.

You'd be better off using package.el, but you will also find a (historical) Debian package.

restart emacs, and you can start using it.

Dependency for all systems

Install the mpg123 and ogg123 programs with your system's package manager :

Check you have the following in your Init_File :

start mpg123, choose a directory or a mp3/ogg file and start listening. The buffer shows a complete list of commands.

add in your .emacs:

restart emacs. To control mpg123 from the outside, you have to start a server, for example with M-x server-start. Now you have access to a few functions that you can call this way:

define a global shorcut with your desktop manager and you're done !

Bongo is a beautiful, flexible and usable buffer-oriented media player for Emacs, developed in parallel to EMMS 2.0. If you store your music collection locally and use structured file names, then Bongo is a great way for you to play music from within Emacs.

Notable features of Bongo include :

Bongo woks with many backend processes : mpg123, mplayer, vlc, ogg123, timidity and others.

An advantage of Bongo over EMMS may be that it can hook into Dired, so one would sort and manage files in Dired and press e to add a track to the playlist.

There is no el-get recipe for bongo (is there for MELPA in emacs24 ?). You have to install it from git. It is a 3 steps process :

Run Bongo with (have a guess) M-x bongo and you'll be left with a quite explicit buffer. To learn more commands, please notice the menu entry and see the documentation at the project's page.

When on the library buffer, to add a track to the end of the playlist, press e. To add it at the beginning, press E.

Check the good documentation on the project's page : https://github.com/dbrock/bongo

Bongo can read online streams out of the box. As said in the buffer, press i and paste your stream's url.

If Bongo plays a track and stops, try only enabling the mplayer backend only:

mpdel, a client to MPD

MPDel is an emacs client for the Music Player Daemon. MPDel provides an Emacs user interface to control playback (play, pause, next, volume up…) and to display and control the current playlist as well as your stored playlists (e.g., “my favorites”, “wake me up”, “make me dance”, …).

Dionysos (in melpa) is a music player which accepts as backends mpv, mpd and vlc.

Vuiet is a music player and explorer, with recommendations based on Lastfm or Spotify. It can: