Difference between revisions of "Ncl"

NCL (NCAR Command Language) is a popular language in the field of Earth science. It processes and displays scientific data efficiently. .

NOTE: There are two version of ncl.el. One is the official version by NCL folks which contains only ncl.el. The forked version contains few fixes to ncl.el and and ncl-doc el and other goodies to be used by other Emacs packages

To activate ncl-mode automatically for all files with an extension ".ncl" add add the following your .emacs 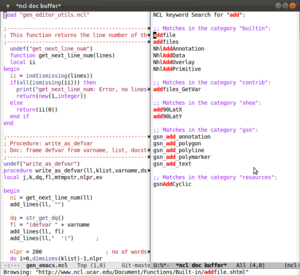 to start ncl-doc-mode for each ncl buffer add the following your .emacs

[C-c C-s] (or M-x ncl-doc-query-at-point)
This function does few things.

+ if it finds URL for the string call the browser to open that URL
+ If no URL is found, then goes on to search for the given string.
+ Displays all search matches in separate buffer category wise. In that buffer RET in any search match will call browser for take you to that page.
+ If no matches found for a given string it leaves you there

[C-c C-o] (or M-x ncl-doc-query-open)
Use this function you lets you choose from the all keywords ncl-doc has in its database and takes you to that page.